LeGuin Exercises - Number One - "Being Gorgeous"

Have you ever tried to write for the purpose of language only? I think I'm more "into language" than other writers, though I wouldn't say I know where to draw the line. Many a year of my childhood was spent inhaling L.M. Montgomery books. There's definitely some rolling sentences in those books.... some paragraphs that go on and on and on, just because the words are trailing one another and having a great time. I've tried to not be so "poetic" in my writing, but often my first drafts come out as a sort of long-handed poetry. I try to make more useful sentences. To stop repeating things, just because I found another more exciting way to say it. Purple Prose is on the outs and outs, some would say. But this prompt is all for the words. I still can't say I'm good at onomatopoeia. But I love me some good alliteration.

What are some of your favorite "wordy" sentences????


Exercise One: Being Gorgeous

Part One, 15 minutes of writing

(This particular prompts emphasizes choosing language that’s meant to be read aloud. Luxuriating in word choice. This prompt should have no particular plot, it’s all about the words.) 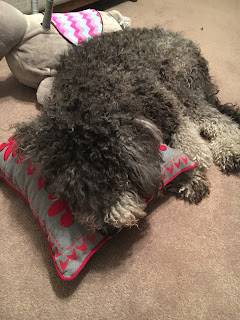 Her fur is round. Can fur be round? Of course it can. It curls back on itself, undulating up and down.

It looks soft. When you touch it, it’s not. It takes texture to hold all that curl. It takes a grating roughness to make that whirling twirl of a spiral. A rough surface, the kind that scratches against your skin, pulling away little particles of cells as prisoners. It’s straight hair that’s smooth. Such a contradiction for the visual and tactile senses.

Her curls draw you forward to touching, and then when you do, nothing is as expected. There is dirt in there. There are pieces of leaves. There are twigs held hostage by the clinging grabby-ness of her pelt. You’ll have to be careful not to stab yourself on a stray pine needle. Poking upward. Pricking outward. Pleading to meet its purpose.

It’s grown matted, that cloak of fur. We should brush it, I suppose. But there are six real children here, and she is a panting hound who must content herself with the baby throw her a ball.

You can press your fingers into her pelt, and almost reach her skin, but not quite. Those strands have criss-crossed together. They’ve bent themselves over each other. They’ve folded themselves in reverence around her form. They’ve wrapped her body in their embrace.

And how disappointed her groomer will be to find we haven’t brushed her at all.

Black and Grey. White and Grey. Smudged with dirt and rainwater. She’s a well-loved puppy. There is food pressed in those curls. The peanut butter leftovers. of a tender hand. No, she isn’t soft.

But we’ll pet her anyhow.

(This prompt begs the writer to describe an emotion while making the words and sentences represent that emotion.)

It stretches out, the feeling of discouragement.

It is long, and listless, and belittling. I slide down it, its surface so slippery I can find nothing to grab, nothing to hold onto and yank myself upward again.

It is right that discouragement is such a long word. So many syllables, so many pieces of meaning strung up together. Discouragement lasts that long. You have to feel your way around it, almost like the mouth does, when it’s speaking the word. Up, down, around, and through. Keep going. You’re not to the end of it yet.

It has a companion: disappointment. Also long. Also full of syllables. Also a travesty to walk your way along when you’re young and sounding out its manifold parts. Don’t get lost in the middle. Don’t forget a letter or a sound. You’ll have to start over, if you get it wrong.

You’ll have to start over, if you get it right.

Dis. It starts with dis. Dis is not how I planned for it to go, you see. Dis is not what I wanted to happened. Dis is downright dis-gusting, when you come to think of it.

It’s a word I learned a long time ago. Some long words, some complicated words, they come later. Scientific words. Words with “p’s” that sound like “f’s”. Words with Latin and Greek snuck in at more than one juncture. Words that trip up the mouth, that force you to ask someone else how exactly they’re spoken aloud.

Even when your dis-ing them.

You can lay down beside that discouragement, your feet and arms lanky and lolling. Let your head turn side to side, you won’t get lost, you won’t lose sight of it. It’s a tall word, it’s a fat word, it will wrap you inside its embrace.

But you might need to breath shallowly. The air is thin around a thing like that. The air is sucked away. It takes so much oxygen to speak it to life. Nothing is left of the sky afterward. Nothing upward remains to be flying your way into.

It’s all come crashing down, you see. Impaled on the spiking hardy-ness of that word.

And if it made it through that, disappointment will finish it, in the end.