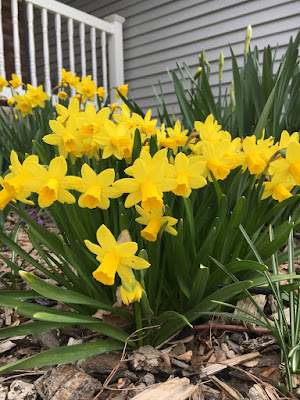 She'd been cleaning the baseboards. And the tops of the fans. And the corners where the beds met the wall.

She'd also been sneezing off and on for two hours straight.

She remembered the stories her mother told. How spring cleaning came from a time of coal fireplaces. Of soot on the walls.

She tried to imagine the soot on the walls. Wiping it off. Drinking that mess down her lungs as she did so. The dust already made her sneeze. What would soot do?

The handrail had been grimy. That was the closest she could come to thinking of the soot. She'd had to press against it with that white foaming miracle eraser who had who knows what built into its system.

Afterward, she couldn't tell if the stickiness on her hands came from the handrail. Or the eraser. Did it matter? The stickiness still made her want to shower.

What made all that cleaning seem so necessary?

The light coming in at the windows?

Her restlessness to get outside when it was still too cold?

The anxiety that had been building inside her since all those ridiculous gifts of the season had pressed their way inside her door?

She could throw boxes, and all they'd held, away for millennia. If only anyone else in the house would let her.

Was it a bid to make things perfect? To wipe away the grime and make all the awfulness of winter disappear?

It made her tired. All the cleaning. And it made her wonder how she'd feel when it all came back for the next year.

And when she raised her eyes, the daffodils were nodding back at her. Buffeted by the wind, yes, but warmed the same way she was.