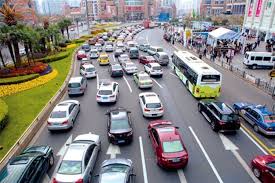 It was all over. That was the long and short of it. The upside down of it. The frontward and backward of it. The anyway and which-way of it. It was ruined.

She'd kept thinking there must be some way to make it come out right. Some ultra-secret, just on the tip of her tongue, shortcut. But even that still came back to procedure. To her thinking a procedure of some sort would save her if she just searched long and hard enough for it. It was easier to flail about searching for a solution than to admit the truth.

And she couldn't make it happen.

She was up to 49. She'd let three buses pass in the meantime. Not all of them would have gone directly home, but they each would have gotten her close enough to walk. But it seemed better to sit here and berate people's choice in color when it came to cars. What was the use in going home when she hadn't managed to accomplish what she'd been aiming for each and every day for the past ten years?

The road stood empty for a moment. No cars to count. No busses to wave past. She choked in a shudder. She gritted her teeth, trying not to let it out in a blubbering mess.

Where were all the red cars? Didn't they know that counting them was the only way she'd managed to make it this far? It seemed idiotic that of all the requests that she ranted upward to the sky, it would be the quota about red cars that would be granted.

The light changed one block down and the cars raced past again.

5 red cars among them.

That request too, seemed to go unanswered. Who did she think she was, to get any sort of answer?

By JGEM August 30, 2018
August has been my month of painting. We are changing our kitchen, and my job has been to make our oak cabinets into grey cabinets. Every afternoon, in the time I normally use for writing, I paint. the color is Dorian Gray ... so at least I'm keeping the literary mode. I told myself I would paint for all of August, and then, no matter how far I'd gotten, I'd be done. Let me just say, painting is not nearly as fulfilling as writing. Perhaps it helped the Karate Kid out, but I am ready to be done! I'm glad I bought a paint sprayer, or I would have had to give up on the project entirely! Today, I administered my last coat of paint to drawers and cabinets. Alas, my kitchen is not done being painted (trim and cabinet backs elude me) but I cannot start another project that will be finished in one day, so I am done. All the other fixes will have to be finished in leftover moments, not in my precious afternoon hours. Which means today I had time to wri
Post a Comment
Read more