Topic: On top of the clouds, what is there? 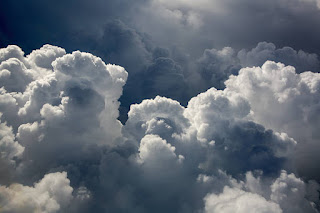 It seems a shame it feels so solid. She had hoped for the sticky softness of cotton candy. Or at least the feeling of diving inside the down covers of her mother's bed. Instead, she almost feels a crunch. She knows if she reaches down and trails her fingers along the clouds' lengths, she'll only end up disappointed.

She breathes in the thin air around her. All their talk of water droplets and spaces between molecules. The scientists were entirely too full of themselves, and that was a fact. Of course, she had believed them over her father, but the truth comes out in the end. They were wrong and he was right.

He would be proud of that.

There were only so many hours before the sun would set, and then she was fairly certain she'd be cold despite the magic that brought her here. It was high-time to start walking. It was a race of sorts, if she meant to find the castle.

She'd looked for pictures in the sky before. Unicorns. Dragons. Teacups turned upside down. She wonders if the castle would look that way, or if it will all be different, just like the clouds beneath her feet. She'd crossed to a more solid version of this world, it only made sense the castle would be more solid too.

Maybe it wouldn't be a castle. Maybe it would only be a house. The kind of house with three stories. And a library. And a gardener who only snips the rose's branches, leaving the other three gardeners to weed the garden. A more realistic castle. A more frightening castle. A castle she belonged even less inside.

He'd told her to follow her. He'd said she could find it if she came up the back stairs.

What a way to describe her ascent into the sky!

Perhaps if she closed her eyes and kept walking it would all arrive more quickly. Although she must admit it wouldn't do to step off of her perch and tumble to the ground below.