A writer, what, what.

By Juice - January 06, 2015
Oh, the inner mind of someone who spends their time writing. Let me tell you, it’s a strange place to be. Writing is a solitary world, and decidedly dreary at times, and also, very full of self-doubt. And when you are a beginning writer, as I am, it is a place you inhabit in secret. Writers are readers, and they know, because of this, that there are good writers and bad writers. And they also know, based on the percentages, that it is probable they are a bad writer, and also that no one in the outside world likely cares.

Writing, as I’ve often moaned, is nothing like quilting. There are, of course, similarities. Quilting is hard work. Quilting is intricate. Quilting requires a plan and time-developed skills. Quilting is a work of creation. Quilting seeks to provide beauty and inspiration and meaning. But quilting is always, even in its most basic form, tangible. And no matter how ugly the quilt, someone is certainly bound to make use of it. This is the difficulty in writing, at least for me. So much of what a writer creates remains hidden and unseen. So much of what a writer creates cannot be touched by those beyond.

I have been writing young adult fantasy novels and personal essays for eight years now. I began when Ellie was one year old and I was well on my way to going insane. Writing helped. In the years since then, I have tried to write a little each day. This usually ends up meaning a little writing about three days a week. That’s how it rolls with children. A little each day comes to mean a little about half as many days as you actually intended. And this is not counting the months that just don’t work out at all, the months that disappear into the annals of: it was just time to take a nap. But I have written, and I have plugged along, and I have kept going. I have done this for eight years. This is all that there is to be done when you want to be a writer. You must just keep. on. writing. To yourself, of course, because no one wants to or should be forced to read what comes out of your mind in those beginning stages.

Recently, I had a moment, of sorts. My current novel was going nowhere with a quite deliberate gait, and while before I had always seen growth in my writing, I couldn’t see where to head this time. It is fine to be unsuccessful if you have hopes and ideas about how to change and progress forward. If you are simply unsuccessful and can see no way to do better then it’s time to buy some ice cream and watch movies in your spare time. Much more productive. It was at this time that I thought about the quilts. Because what if I had decided to make quilts instead? It’s true, I had started a quilt once. It’s true, it’s still in a box downstairs. But you know, what if?

What ifs, by the way, are terribly un-productive. And quilting, unfortunately, is obviously not my thing.

So, a writer, what, what. This is what I wanted to be. And apparently, it’s something I’ve needed to learn to own. The truth is, it is a difficult thing to say you are a writer. When there are no books. When there is no proof. When there is nothing to see or read. It is a difficult thing to work in words, and know that everyone who reads what you write will be judging, will be considering, will be comparing. Words are misunderstood. Words are forgotten. Words are ignored. Words are invisible and hard to see. But if I’m not going to make quilts, then I’ve got to really mean it. I’ve got to mean being a writer.
I am a writer, what, what.

I am a writer.

Oh, heavens! I’ll keep saying it, and someday, it will be true.
Writing

August has been my month of painting. We are changing our kitchen, and my job has been to make our oak cabinets into grey cabinets. Every afternoon, in the time I normally use for writing, I paint. the color is Dorian Gray... so at least I'm keeping the literary mode. I told myself I would paint for all of August, and then, no matter how far I'd gotten, I'd be done.

Let me just say, painting is not nearly as fulfilling as writing. Perhaps it helped the Karate Kid out, but I am ready to be done! I'm glad I bought a paint sprayer, or I would have had to give up on the project entirely!

Today, I administered my last coat of paint to drawers and cabinets. Alas, my kitchen is not done being painted (trim and cabinet backs elude me) but I cannot start another project that will be finished in one day, so I am done. All the other fixes will have to be finished in leftover moments, not in my precious afternoon hours.

Which means today I had time to write. And it came a few days…
Read more

By JGEM - July 02, 2018
*I have been reading Ursula Le Guin's book Steering the Craft and completing the exercises here to give myself some accountability.

In this exercise, the writer is asked to write one paragraph with many small sentences (no longer than seven words, no sentence fragments), and one paragraph made up entirely of one sentence. Different versions of the exercise are offered including:

I plan on using the same topic. The topic I will use is from @anndeecandy's Instagram account giving memoir prompts. I will turn my memoir prompt into a fiction prompt and use it for this exercise. This particular prompt asks the writer to address the idea of growing…
Read more 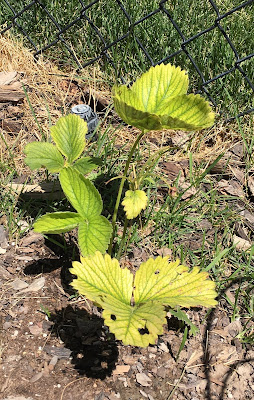 Last year, almost at the end of summer, I finally bought a dead-looking bunch of strawberry plants. My daughter had been begging for us to plant strawberries, and it had taken me that long to make the purchase. Truthfully, it only happened because a leftover slab of strawberries pretty much walked its way into my cart while I went to buy something else. Still, promise kept, strawberries bought.

We planted the strawberries and, since we live in Idaho, it was still cool enough for them to grow. We got about three strawberries and all took turns taking a bite. Then we waited excitedly for the next year, when there would be more strawberries.

When spring came we were happy to note that the strawberries had spread out and begun growing even more plants. Little white flowers dotted the greenery, all of them promising a bountiful harvest. We had neighbors with awesome strawberry patches, and felt we were well on our way to acquiring our own.

And then, something happened. If that sounds vague…
Read more